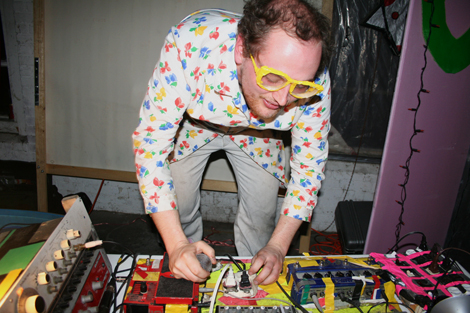 DAN DEACON   SPIDERMAN OF THE RINGS

“Standing in a Greyhound Bus station, wearing a Sylvester t-shirt and huge duct-tape-covered glasses, Baltimore ’s Dan Deacon doesn’t invoke the image of a composer to the other bus riders. The two suitcases he loads under the bus, which accompany him from city to city, hold the sweat-and-grime-soaked electronics that he uses to craft his raging, maxed-out party music and light show. After 12 tours and 300+ shows in little over 2 years, the gear is beaten and battered, but the show and the energy it produces is anything but.

Dan Deacon has garnered a reputation in the underground as an intense performer and classic showman. The table top full of pedals, a sine wave generator, vocoder and Casio blasting through the PA, joined by a makeshift light board with various bulbs and green skull strobe light, make his all out dance-til-you-drop performance a complete experience.

But it isn’t all fancy feet and bouncy beats. Deacon is a classically trained composer with a Masters degree in electro-acoustic composition. He has released 7 albums from 2003 to 2006, but those self-produced recordings do not contain the vocal-based experimental pop that he has fine-tuned in live performance. His latest full length, Spiderman of the Rings is the first album bridging the gap between party performer and genuine composer. A mixture of his live show dance anthems, intricate instrumentals and humorous monologues, Spiderman of the Rings establishes Dan Deacon as a new type of entertainer in the contemporary underground.”

The third release of WILDFIRE WILDFIRE, Spiderman of the Rings is an LP licensed from CarPark Records.

DAN DEACON has toured the USA, Europe, Australia and New Zealand. He is sure to tour the entire world. Tour supporters have included Ecstatic Sunshine, Video Hippos, Girl Talk, High Places, Santa Dads, OCDJ and dozens of friends from Baltimore. 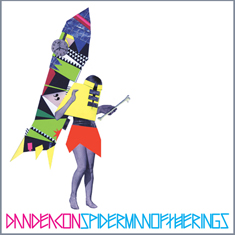